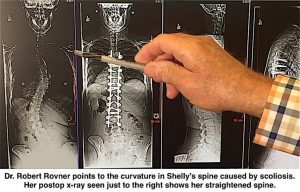 Scoliosis is an abnormal, often progressive curvature of the spine that also causes the spine to rotate. Danville, CA spine surgeon Robert Rovner, MD has developed a new technique and surgical hardware to more fully correct the spine’s rotation for the first time. This rotation can create a telltale “rib hump” which is not fully corrected by conventional surgical procedures. “I believe this procedure can provide the best outcomes compared to the currently available treatments for scoliosis,” says Dr. Rovner.

“Scoliosis is most often diagnosed in childhood or early adolescence, although there are many adults living with scoliosis which can continue to worsen,” says Dr. Rovner. “Scoliosis can cause a rotational deformity characterized by a protruding “rib hump” which occurs when the ribs on the high side are rotated up. This can result in a ‘hunchback’ – like appearance.”

Dr. Rovner’s procedure employs a device that allows the surgeon to make the spine as straight as possible by enabling adjustments from both sides of the spine, instead of from just one side. “Conventional surgeries focus on correcting the curvature deformity but will only slightly correct the rotation of the spine,” he says.

Shelly, 31, recently underwent the new procedure performed by Dr. Rovner. At age 10 she was diagnosed with scoliosis. At he time Shelley had a  39 degree spinal curvature, but her parents decided not to approve the recommended surgery that was available at the time, which was extremely daunting. “I would have had to be in a full body cast for many months,” she says. Shelly decided to have the procedure done earlier this year, after she had her first child.  Dr. Rovner says at the time of Shelly’s surgery the curvature of her spine had increased to 54 degrees. “The spine’s normal curvature should be zero,” says Dr. Rovner. “Shelly’s curvature and rotation have been returned to normal levels and she is now doing very well.”

Robert Rovner, MD is a board certified spine surgeon at Disc & Spine in Danville, CA.